AAUW’s salary negotiation workshops are designed to help you negotiate for a new job, raise, or promotion. In every workshop you’ll gain confidence in your negotiation style through facilitated discussion and learn:

Why is negotiation so important? AAUW’s research on the gender pay gap shows that, one year out of college, women are already paid significantly less than men. Women who work full time take home about 80 cents for every dollar a full-time male worker is paid. And over a lifetime, those lost potential earnings add up.

Women who negotiate increase their potential to earn higher salaries and better benefits packages. By negotiating fair and equitable salaries, you’ll be better able to pay off loans, buy the things you want and need, and even save for retirement.

AAUW-MT with a grant from the Women’s Foundation of Montana, and additional funding from the Offices of the Presidents of the University of Montana (UM) and Montana State University (MSU), the Office of the Commissioner of Higher Education (OCHE), the MSU Women’s Center, purchased two three-year site licenses to bring Start Smart Salary Negotiation workshops to the 8 Montana University System (MUS) campuses.

In March of 2015, the AAUW-MT grant project brought the AAUW National Trainer to Montana to provide Start Smart Salary Negotiation Workshops and Facilitator Trainings. Start Smart workshops, for women students about to enter the workplace, and facilitator trainings were conducted on three MUS campuses: (1) The  University of Montana (UM), (2) University of Montana Western (UMW), and (3) Montana State University (MSU).

During the above 3 March 2015 workshops 27 women were also trained as facilitators and they are now able to facilitate future workshops on all eight campuses covered by our site licenses—UM in Missoula, Montana Tech in Butte, UM-Western in Dillon, Helena College, MSU in Bozeman, MSU-Billings, MSU-Northern in Havre, and Great Falls College.

In fall semester 2015 Start Smart workshops were facilitated at six of the Montana University System (MUS) campuses (see above picture section for locations).

For further information and/or to register for a salary negotiation workshop, go to the Start Smart/Work Smart Workshop tab on the top menu bar on the AAUW-MT website home page. 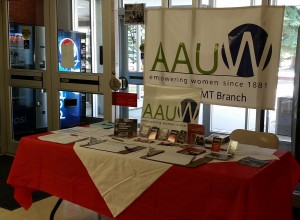 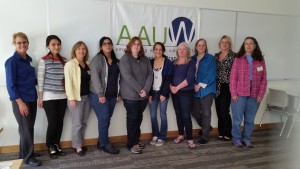 The fall 2015 semester Start Smart Salary Negotiation workshop was held in the Jake Jabs College of Business on Saturday October 17th. The workshop was sponsored by the AAUW-Bozeman Branch, the MSU Women’s Center, and the Business College.

The first 2015-16 Salary Negotiation workshop sponsored by the AAUW-MT Grant Project and conducted by facilitators trained in March 2015 was held at Helena College of UM on October 8th. Sponsored by AAUW-MT and Helena College the participants included students and staff. 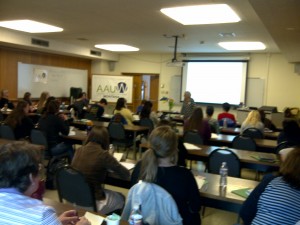 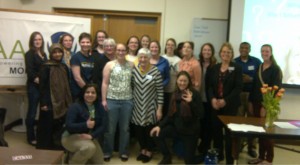 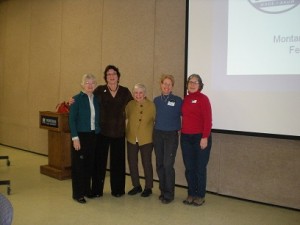 When Montana State University (MSU) decided to sponsor the first Start Smart salary negotiation workshop to be held in the state, AAUW-MT and AAUW-Bozeman agreed to co-sponsor the event.  Annie Houle (center in photo) flew in from North Carolina to facilitate both a Work$mart workshop in Helena on Friday, January 31, 2014, and MSU’s Start Smart workshop on Saturday, February 1.  Despite snowy weather, the workshop was attended by almost 40 young women.

the gender pay gap by state